Home » Twister of the Month – April – Alexandra Greenwald
Previous Next

The recent shooting at Marjory Stoneman Douglas High School in Parkland hit way too close to home for Twisters. Many of our students, including our Team girls, currently attend MSD and knew the victims. One of our Level 10 Team gymnasts, Alexandra Greenwald, lost one of her closest friends, Nicholas Dworet, in the shooting. Nick’s brother, Alex, was also shot and survived. Though facing heartbreak no high school senior should have to endure, Alexandra turned her grief into action and organized a meal train for Nick’s family to help support them in their darkest hour. In addition, she has dedicated her collegiate gymnastics career at Iowa to Nick since he will not be able to fulfill his dream of competing as a collegiate swimmer at the University of Indianapolis and making the Olympic games in 2020. For this reason and more, we are proud to honor Alexandra as Twister of the Month.

As an outstanding Level 10 gymnast and recipient of a full athletic AND academic scholarship to the University of Iowa, Alex has already been a great source of pride and joy for our organization and our Twisters family. In light of the recent shooting at her school, and her actions following the shooting despite losing one of her closest friends in the tragedy, Alexandra has once again brought a sense of pride to Twisters with her generosity and support for others. To this date, 77 meals have been delivered to the Dworet family.

Below is a letter from Alex. Once again, Twisters is beyond proud to have this outstanding young woman as a part of our Twisters family.

“My name is Alexandra Greenwald. I am a senior at Marjory Stoneman Douglas and a level 10 gymnast at American Twisters. I have been a gymnast at American Twisters for 13 years. I am a member of the National Honor Society and have received various recognitions and awards for my academic work. Throughout high school, I have volunteered with Parkland Buddy Sports, a non-profit organization that provides organized sports and fun for children with special needs. As a gymnast, I have placed 8th in the nation in the all-around in 2016 and 2017 and 4th in the nation on bars in 2017. I am Region 8 all-around, bars, and floor champion in 2016 and 2017, as well as Region 8 beam champion in 2016.

During the recent school shooting, two brothers I have been friends with since I was in kindergarten were shot. The younger one, Alex, was grazed in the head with a  bullet and his older brother, Nick, a senior like me, was shot four times and died. Our families have been close since we were young and we were devastated for their loss.  As a way to ease the burden for their family during this tragic time, I started a meal train for them. This meal train uses a website that organizes a way for people to volunteer to bring dinner to their house. This idea came to me as a way for me to show them the love and support that the community has for them and how much Nick’s life mattered. I shared the meal train with my anatomy class, where Nick was one of our classmates; I also worked with Nick’s swim coach at MSD, so she could share the link with his swim team. The North West Broward Road Runners club shared the link with their members and I talked with the kids at the youth running club, where Nick and I shared many of our first memories running and training together since we were young.

Staring in June, I will be attending the University of Iowa on a full athletic scholarship for gymnastics. Just weeks before February 14, Nick signed his National Letter of Intent to swim at the University of Indianapolis. Competing at the college level in our respective sports has always been one of Nick and my goals for as long as I can remember. Nick was dedicated and passionate about his swimming and even had goals to swim in the Olympics representing Sweden after college. In honor of Nick, I have dedicated my gymnastics collegiate career at Iowa to him, since he will not be able to fulfill his dream. I promise to compete with dignity, desire, and determination, just as he always had.” 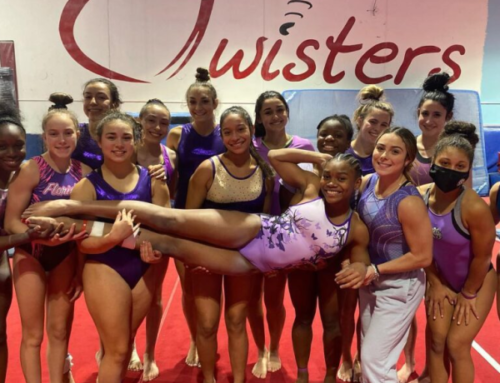